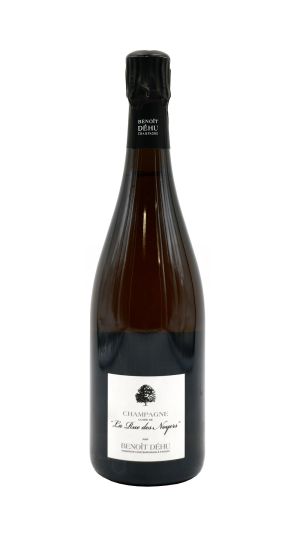 94
VM
Be the first to review this product
As low as $62.99
Only %1 left
Product ID
benoit-dehu-champagne-cuvee-de-la-rue-des-noyers-brut-nature-201
Add to Wish List Add to Compare
Details

The NV (2015) Extra Brut Cuvée La Rue des Noyers speaks with real authority, and yet the 2015 is one of the more delicate versions of this cuvée so far. Time in the glass allows the wine to blossom nicely. Dried pear, smoke, herbs and dried flowers fill out the wine's creamy frame effortlessly. Once again, the Rue des Noyers is one of the most distinctive wines in Champagne. Dosage is 1 grams per liter. Disgorged: July 2017.

Vinous Media | 94 VMBenoît Déhu's NV Extra Brut La Rue des Noyers is a 100% Meunier from a biodynamically farmed 1.7 hectare plot in Fossoy with dark limestone soils. Fermented and aged for ten months in used 228 liter barrels but with "no malolactic, no racking, no filtering, no cold stabilization and no fining," says Benoît Déhu, when he presented me his wine at the presentation of the Origines Champagne group in Château de Pierry earlier this year. "We produce our wines like our colleagues in Burgundy." It had two different Cuvées of this wine. Their first was entirely based on the 2011 vintage and was disgorged in June 2014 with a minimal dosage of one gram per liter. It is an impressively deep, intense and full-bodied Champagne that displays ripe fruit and slightly smoky flavors on the nose; it is very pure, complex and well structured on the palate. This stunningly powerful and persistent Champagne is surely made for a long distance run. The second wine is the successor and based on vintage 2012, but disgorged with no dosage. This is a very delicate and elegant release with a superbly refined mousse. However, it is also straight, firm and perhaps even finer than the 2011.

Robert Parker Wine Advocate | 93+ RP(NV Benoît Déhu “Cuvée La Rue des Noyers” Brut Nature NV (Fossoy)) The current release of Benoît Déhu’s “Cuvée La Rue des Noyers” Brut Nature is from the 2014 vintage. Monsieur Déhu ages his vins clairs for this bottling for eleven months in casks prior to bottling for its secondary fermentation. The cuvée is composed entirely of pinot meunier, which has been farmed biodynamically for several years now and was disgorged in August 2017. The wine shows a bit of its barrel-fermentation on the nose, with a nice touch of vanillin oak to augment scents of white peach, chalky soil tones, brioche, almond and meunier floral tones. On the palate the wine is crisp, full-bodied and shows off lovely mid-palate depth, with fine focus and grip, nicely-integrated acidity, elegant mousse and excellent length and grip on the complex finish. This really has excellent balance for a young non-dosé bottling and should age long and gracefully. Classy juice. (Drink between 2018-2040).