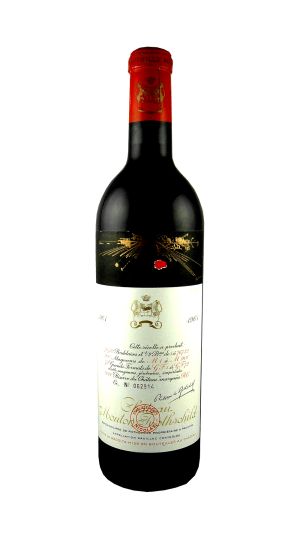 Huge, cedary, cassis, lead pencil, menthol-like aromas soared from the glass. The black/purple color revealed no signs of lightening or amber at the edge. Full-bodied, rich, and super-intense, this was an a profound bottle of 1961 Mouton that would have stood up against the compelling 1959. I have found the 1961 Mouton-Rothschild to be distressingly variable in quality, much like the consistently inconsistent 1970. At its best the wine is a great Mouton. Last tasted 10/94

Robert Parker | 98 RP(Mouton Rothschild Mouton-rothschild Red) The 1961 Mouton-Rothschild is one of those elusive wines that until now I have never tasted. Deep in colour with remarkably little ageing on the rim, it has a stunning bouquet with blackberry, briary and wild heather aromas. Graphite and leather emerge with time, after five minutes matching the ethereal quality of the Palmer. The palate is beautifully balanced with enormous depth, subtle marine scents infusing the black fruit, later freshly picked mint. There is an effervescent quality about this Mouton-Rothschild, a supremely gifted wine that dares to challenge the supremacy of the 1961 Latour. What a fabulous wine. Tasted at the 1961 dinner Chairman Miaow’s in Hong Kong. (Drink between 2019-2050)

Vinous Media | 98 VMTasted from magnum. Subtle in flavor, silky in texture and still firm with tannins, this Mouton is clearly outstanding in quality. Elegance, not richness, is its hallmark, and the mélange of spice-earth-fruit flavors is nearly mature.--1961 Bordeaux horizontal. Drink now through 2005. —