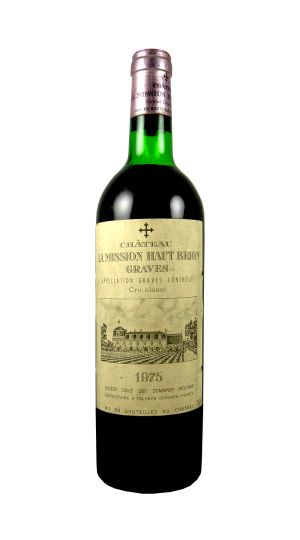 This is undisputably the wine of the vintage, a year that was clearly over-exposed and over-rated, largely because it was better than the four vintages that preceded it. However, it was not terribly exciting in the final analysis. The 1975 La Mission-Haut-Brion, which consistently received perfect scores in its first thirty years of life, remains a vibrant, vital wine. While there are some still gorgeous 1975s (i.e., Petrus, l’Evangile, Trotanoy, Lafleur, and Haut-Brion) that came on much later in life, La Mission possesses enough evidence of greatness to stand alone as the finest 1975. From a cool year with a tiny crop, most 1975s are tannic, dense and out of balance. La Mission’s extraordinary terroir, with its well-drained, gravelly soils fared unbelievably well, and the 1975 was a blockbuster for its first 20-30 years of life. While much of the fat has faded away, the wine still possesses a vitality and vigor that belies its 37 years of age. The color is a dark garnet with just a touch of lightening at the rim. Notes of camphor, wood charcoal, black fruits, plums, cedar, damp earth, truffles, asphalt and smoke result in a fabulous set of aromatics that are nothing short of compelling. Based on the aromatics alone, this offering would merit a perfect score, but some of the nasty tannins in this vintage are beginning to make their presence known on the palate. Nevertheless, this is a freak for the year – very concentrated, dense and remarkably youthful. It will undoubtedly provide extraordinary drinking for another 30-50 years. Nothing about this wine indicates it can’t keep going, although its one-time perfection has faded ever so slightly. This amazing effort is a truly profound wine in another disastrous vintage in Bordeaux!

Robert Parker | 97 RP(Château La Mission Haut-Brion) I have had the pleasure to taste the powerful 1975 La Mission on several occasions, and while I have always been impressed with the quality of the wine, I am not quite as smitten with this vintage as several other commentators. The deep and classic La Mission bouquet soars from the glass in a slightly horsey blend of cassis, dark berries, saddle leather, plenty of chipotle pepper, tobacco, herbs, plenty of dark soil tones and a topnote of cigar box. On the palate the wine is deep, full-bodied and very complex, with a rock solid core of fruit, plenty of tannins still waiting to be resolved and outstanding length and grip on the very powerful finish. While this wine is already drinkable, it seems to me that it remains a bit primary on both the nose and palate and will continue to improve if allowed to stay in the cellar another five to ten years. There is certainly no rush to drink it, as it is a very structured, old-fashioned style of La Mission that should last for decades to come. (Drink between 2015-2065)

John Gilman | 94+ JGThis is a legend in the market, but I have never thought it was perfection. The nose is impressive with dried stones, sweet tobacco and dried dark fruits. It is full-bodied with loads of ripe fruit, iodine, and sea salt flavors. It is full, powerful, and chewy. Turns dry from the tannins on the finish.

James Suckling | 94 JSThe 1975 La Mission Haut-Brion has been hailed in some quarters as a high point for the estate in the Seventies. My own experience has been one of inconsistency, especially compared to the reliable and, in my mind, superior 1978. According to a half-dozen or so tasting notes from 2000 onward, the 1975 was always robust, dense and nearly impenetrable. One bottle at the vertical in 2008 finally lived up to high expectations, but a follow-up two years later felt charmless. This bottle is conspicuously deep in hue. The nose is backward at first, eventually revealing blackberry, iodine and light licorice scents; later, a touch of gaminess creeps in. The palate is full-bodied and full of sinew, with thick tannins framing the multilayered, ferrous black fruit. This is huge in terms of grip, and almost brutish toward the finish. It’s impressive in stature, but the 1978 possesses greater nuance and more panache. Tasted at a private dinner in Hong Kong.

Vinous Media | 93 VMThis has been heralded as one of the greatest La Missions ever, but I have my doubts. Will it ever come around? Deep, dark aromas; full-bodied, with superb concentration of fruit, but extremely tough and tannic, with high alcohol. Lacks a bit of balance. Could become like the '37?--La Mission-Haut-Brion vertical. Best from 1995 through 1997.