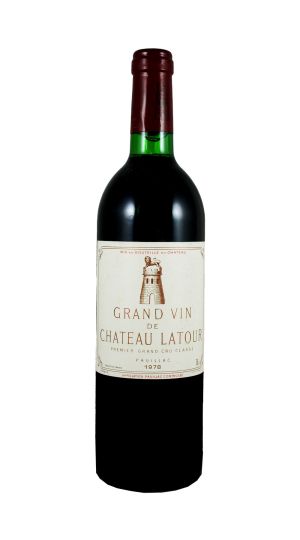 Better than I anticipated. A sleek and racy wine.Ruby-amber color. Aromas of cedar, cigar box,tobacco, mint and mushrooms, with hints of redfruits, follow though to a medium body with finetannins and a long, silky finish. Excellent now,but a little more bottle age would only improveit.--Latour vertical. Best after 2005.

Wine Spectator | 92 WSMedium garnet-colored with moderate amber at the edge, the 1978 Latour offers a spicy, saddle leather, tobacco, dried herb, earthy nose with sweet fruit trying to poke through. Interestingly, new oak also makes an appearance in the flavors. Medium-bodied, elegant, and fragrant, but possibly beginning to dry out, this fully mature wine requires consumption over the next decade. Anticipated maturity: now-2010.

Robert Parker | 90 RPThe 1978 Latour, served from ex-château double magnums, is a wine that I have encountered several times over the years. Of course, provenance plays its part, likewise the large format, yet I remain unconvinced that this is a top-flight Latour. At least the bouquet is fresh with cedar and pencil lead aromas, commendably detailed considering the era in which it was born. The palate is fully mature, with firm, almost obdurate tannin. The 1978 cries out “old school Pauillac,” with a touch of brine emerging towards the finish that has a distinct rustic edge. It tries to impress more than confer enjoyment upon the drinker. Perhaps now just past its prime, since bottles a decade ago seemed to offer more. Tasted at the Académie du Vin dinner in Bordeaux.