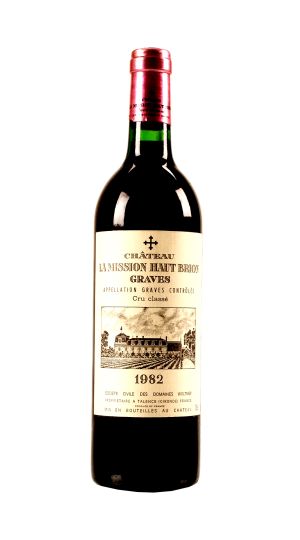 A monumental wine, this historic La Mission-Haut-Brion was the last vintage made by the descendants of the Woltner family, who had owned this estate for decades prior to selling it to their neighbors, the Dillon family (the American owners of cross-street rival, Chateau Haut-Brion). The 1982 admirably demonstrates the magnificence of La Mission as well as the singularity of this amazing terroir. I had the good fortune of tasting it from barrel (where it was an enormous Graves fruit bomb) and watching it develop more nuances in bottle. At age 30, it remains a majestic, multidimensional, profound Bordeaux with another 20-30+ years of life ahead of it. It’s no secret that the great vintages of Bordeaux have levels of fruit extract and depth that go beyond other years. It is this fruit, often referred to as “fat” or “concentration,” that takes decades to dissipate and fade. As it does so, the extraordinary aromatic expression of the terroir asserts itself. Remarkably, the 1982 is still in late adolescence and has not yet reached its peak. Early in my career, much of my reputation was established on calling this vintage correctly, but I never in my wildest dreams thought the 1982s would mature as slowly and last as long as some seem capable of doing. One of the handful of perfect wines of the vintage, the La Mission still possesses a remarkably dense ruby/purple color with only a slight garnet and lightening at the edge. The fruit-dominated aromatics reveal lots of cassis, blueberry, scorched earth, black truffle, incense, graphite and high-class, unsmoked cigar tobacco-like notes. Still exhibiting remarkable concentration, enormous body, silky sweet tannin, and no perceptible acidity, the 1982 remains fresh, delineated and super-compelling. A massive La Mission made by the Dewravin family and their winemakers, all of whom were dismissed the following year when the estate was acquired by Haut-Brion, this modern day legend shows no signs of decline. In fact, it may not have yet reached its peak. Anticipated maturity: now-2060+.

Robert Parker | 100 RPLa Mission really does have its own character. Full body with velvety tannins with hints of berry, gravel and iodine. Some may not like the later but it tells you it’s La Mission. What a wine. Drink now.

James Suckling | 97 JSGood full medium red. Exotic yet lively aromas of roasted plum, marzipan and grilled nuts. Wonderfully dense but sappy, with grip of steel. Finishes powerfully tannic and extremely long, still with a touch of youthful austerity. A very impressive showing. Drink 2005 to 2025. (My second bottle was equally impressive but came across as even more backward and dominated by its structure.)

Vinous Media | 95 VMThe register of notes changes as we head to Pessac-Léognan. This is one of the most open on display, with a warmth to the fruit that showcases cloves and spices full of tertiary end-of-summer-fruit goodness. A beautiful wine, but just a tiny bit brittle on the finish, this is not quite living up to the pedigree that it has shown on other tastings. We in fact opened a second bottle, served in a decanter (the rest were all in bottle), but it still remained just a nudge behind the others.

Decanter | 94 DECSlightly rustic, but firm and youthful. Dark ruby color. Beautiful aromas of berries and stones, with a hint of black truffles. Medium- to full-bodied, with silky tannins and a long, spicy-stony finish.--1982 Bordeaux horizontal. Best from 2000 through 2010.