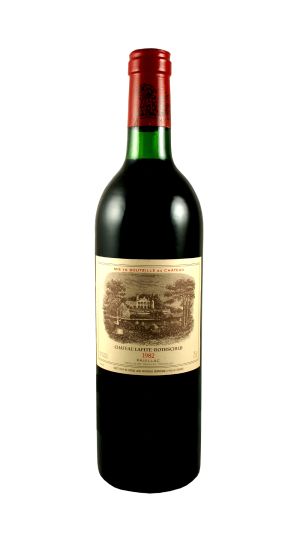 As with the last time I drank this wine two years ago, it is still full of life and energy, with that classic Lafite quality of effortless drinkability. Utterly moreish, it has an amazing cinnamon-edged spice, rich and slightly exotic with brick-red colouring. To recap what we all know to have been a great season, 1982 saw a dry and mild spring, allowing an excellent flowering followed by a dry and hot summer with regular small showers and fresher nights in August. It was an easy harvest that saw an early and large crop, and in the vat rooms they say, it smelt of hot fruit jam. Baron Eric's memories say it all: 'The last day of harvest was a Friday and we knew right away how good the fruit in the tanks was. Everyone was in a great mood, the whole harvest felt like fun.' Drinking Window 2018 - 2040.

Decanter | 98 DECThis is a denser version of the 1990 that stylistically reminds me of what the young 1959 probably tasted like. Still backward with a deep ruby/plum color revealing only a touch of lightening at the edge, the wine offers up an extraordinary nose of caramelized herbs, smoke, cedar, pen ink, black currants, and earth. The gorgeous aromatics are followed by a full-bodied, plump, rich, fleshy wine with low acidity. With 6-8 hours decanting in a closed decanter, it will offer beautiful drinking, but it needs another 5-8 years to reach full maturity. It is capable of lasting 50-60 years. This classic Lafite is not as fat and concentrated as the 1982 Latour, nor as complex or concentrated as the 1982 Mouton Rothschild, but it is a winner all the same.

Robert Parker | 97+ RPThe 1982 Lafite-Rothschild can be a variable performer. There was a period when it was dwarfed by Latour. However, two recent bottles demonstrate a wine that perhaps has just taken 30+ years to reach its zenith. The bouquet is very intense with blackberry, cedar, graphite and hints of morels, gathering momentum in the glass, perhaps with just a touch more VA than its peers. The palate is medium-bodied and very fresh, lively and tensile with a fine thread of acidity. There is more cohesion and finesse than bottles encountered a decade ago, and a delicate but firm structure that frames the pure blackberry and cedar notes on the sustained finish. Wonderful. Tasted at the Lafite-Rothschild dinner at Amuse Bouche in Hong Kong and then blind at the Lafite-Rothschild 150th anniversary dinner at the property.

Vinous Media | 97 VMI am impressed with the loads of ripe fruit with almost dried raspberries and blackberries and a minty undertone on the nose. It's full bodied, with bay leaf, berries that turn to mineral undertones. It's full-bodied, with round tannins and a lingering finish of chocolate, cedar and other woods. I would leave it another three to four years to soften and open just a tiny bit; otherwise, decant three hours in advance.