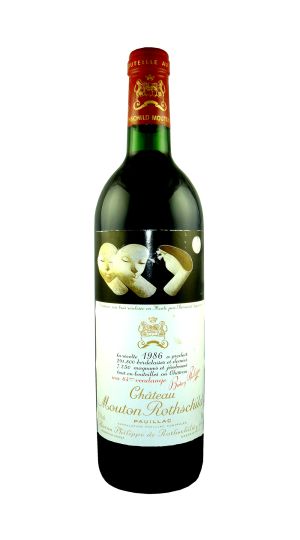 Wonderful, concentrated and still astonishingly young, this has brushes of violet aromatics rising above the tight cassis fruits and rich black truffle, and the classic menthol edging of a Cabernet Sauvignon-dominated Pauillac. We drank this over lunch and it was breathtaking, but were told that 24 hours later it had blossomed even further, so make sure you give this a serious amount of time in carafe to open up - something that gives you just a small clue as to how structured, layered and complex the wine we are dealing with here is. 80% Cabernet Sauvignon, 10% Merlot, 8% Cabernet Franc and 2% Petit Verdot.
Drinking Window 2017 - 2040

Decanter | 100 DECThe 1986 Mouton-Rothschild is a behemoth that almost has a California-like richness and sweetness of fruit. Offering incredible yet classic Cabernet Sauvignon notes of crème de cassis, tobacco leaf, lead pencil shavings, and wood smoke, this beauty starts out reticent and backward (which is mind blowing for a wine that’s 32 years old) yet opens up gorgeously with time in the glass. Full-bodied, deep, rich and unctuous, yet still incredibly pure and lively, it’s a sensational, benchmark Bordeaux that probably has another 2+ decades of longevity.

Jeb Dunnuck | 100 JDThis is finally coming around with such fine tannins and beautiful fruit after all these years. Full and balanced. Historical. And so long. Stunning. Fresh and bright.

James Suckling | 100 JSAfter stumbling over some wines I thought were high class Bordeaux, I nailed this wine in one of the blind tastings for this article. In most tastings where a great Bordeaux is inserted with California Cabernets, the Bordeaux comes across as drier, more austere, and not nearly as rich and concentrated (California wines are inevitably fruitier and more massive). To put it mildly, the 1986 Mouton-Rothschild held its own (and then some), in a flight that included the Caymus Special Selection, Stags Leap Wine Cellars Cask 23, Dunn Howell Mountain, and Joseph Phelps Eisele Vineyard. Clearly the youngest looking, most opaque and concentrated wine of the group, it tastes as if it has not budged in development since I first tasted it out of barrel in March, 1987. An enormously concentrated, massive Mouton-Rothschild, comparable in quality, but not style, to the 1982, 1959, and 1945, this impeccably made wine is still in its infancy. Interestingly, when I was in Bordeaux several years ago, I had this wine served to me blind from a magnum that had been opened and decanted 48 hours previously. Even then, it still tasted like a barrel sample! I suspect the 1986 Mouton-Rothschild requires a minimum of 15-20 more years of cellaring; it has the potential to last for 50-100 years! Given the outrageously high prices being fetched by so many of the great 1982s and 1990s (and lest I forget, the 1995 Bordeaux futures), it appears this wine might still be one of the "relative bargains" in the fine wine marketplace. I wonder how many readers will be in shape to drink it when it does finally reach full maturity?
The tasting notes for this section are from two single blind tastings, one conducted in May, 1996, in California, and the other in June, 1996, in Baltimore.

Robert Parker | 100 RPPhilippe Dhalluin served the 1986 Mouton Rothschild to wrap up our vertical. The 1986 remains one of my favorite Moutons. A dark, powerful wine, the 1986 is endowed with a vertical sense of structure that is a marvel to behold. Dark stone fruit, smoke, graphite, mocha, soy and licorice are fused together in a marvelously intense, deep Mouton that promises to drink well for another few decades. Tonight, the 1986 is absolutely stunning. The blend is 80% Cabernet Sauvignon, 10% Merlot, 8% Cabernet Franc and 2% Petit Verdot. Harvest started on October 2nd and wrapped up on the 16th.

Wine Spectator | 99 WS(Château Mouton-Rothschild) There was a time when I thought that the ’86 Mouton was one of the greatest vintages ever at this fine property, but as the wine crossed its twentieth birthday with no signs of more complexity starting to emerge, I really began to wonder if I had not just been incorrect in my great expectations for this wine. I have tasted the wine two or three times in the last few years and been moderately underwhelmed on each occasion, with this most recent bottle no exception. It is not that the wine is bad per se, but rather that it is still quite monolithic and simple, continuing to show very little development on either the nose and palate. Ten or fifteen years ago, this was not too alarming, as the wine possessed truly exceptional depth of fruit and great purity to go along with its monolithic personality, but at age thirty, I was hoping to see a bit of complexity starting to emerge. The bouquet is indeed starting to show some signs of age, but not a lot more complexity than previously, as it offers up scents of cassis, cigar ash, a touch of tobacco leaf and cedary oak. On the palate the wine is deep and full-bodied, with a primary personality, good, but no longer that great depth of yesteryear. The wine still possesses fine focus, firm, ripe tannins and a long, youthfully simple finish. To be fair to this wine, there are plenty of other 1986 Left Bank wines that are still not remotely ready for primetime drinking, but it is the lack of complexity here that is really the question mark with this wine. It is still a perfectly serviceable vintage of Mouton, and may indeed be great down the road (if this is just a reflection of an extended adolescence), but today, it seems like a far cry from perfection and is not in the same league as the 1989 or 1985 Mouton, let alone the marvelous 1982. (Drink between 2022-2060).