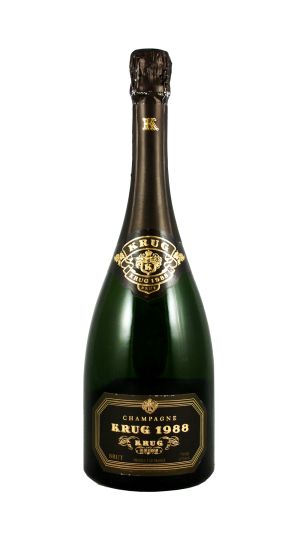 Krug's 1988 Brut has long numbered among my very favorite vintages for this house, with the best bottles flirting with a three-digit score. Offering up complex aromas of apricot, citrus oil, candied peal, toasted brioche and honeycomb, it's full-bodied, concentrated and incisive, with a deep, layered and tightly wound core, racy acids and a searingly chalky finish. If on release the 1988 got less attention than the more immediate, head-turning 1990 and 1989 vintages, with time it is proving itself the most serious of those three consecutive releases.

Robert Parker Wine Advocate | 98 RPA superb Champagne and still youthful. Honey, ginger, lemon confit, coffee and mineral aromas and flavors come to mind, all kept focused by a firm, tightly wound structure. The finish is where its pedigree shines through, lingering like warm gingerbread and coffee. Drink now through 2015. 5,000 cases made.

Wine Spectator | 98 WSThe 1988 Krug makes for a fabulous start. Tasted from a perfect bottle, the 1988 remains bright and focused, with all of the energy of this great vintage very much on display. Time has naturally softened some of the contours and added a good bit of nuance, but the 1988 Krug remains a Champagne of crystalline precision. I loved it.

Antonio Galloni | 97 AGNo written review provided | 96 W&SI have always very much admired the '88 vintage in Champagne because it produced wines that tended toward austerity when they were young and they have aged exceptionally well. The nose here is consistent with this because even though it is fully mature and highly complex, there is a certain calm restraint that accompanies the attractively fresh citrus, cooked apple and toasted bread elements. There is equally good punch and freshness to the powerful and concentrated flavors that possess impressive mid-palate density before concluding in a mouth coating and strikingly long finish. One thing that the '88 Krug is not however is especially refined and in this regard the '85 is finer. In Champagne though rarely is one element able to exist in isolation from another and in terms of potential longevity, at this point I would rather own the '88 than the '85 even if the '85 is a better overall wine. I say this because the '85 appears to be on the edge of a graceful decline whereas the '88 should continue to hold for years to come. (Drink starting 2015)

Burghound | 93 BHThere were two magnums of the ’88 Krug served at this particular tasting, and there was a rather dramatic difference between the two. Once was quite advanced, but I assume that this was simply the storage conditions of the wine before it arrived in the host’s impeccable cellar, rather than indicative of any serious variation between different bottlings of the ’88 Krug. This note reflects the better and less advanced of the two mags. The bouquet is a fine blend of apple, pear, brioche, a touch of sour dough and a lovely base of stony minerality. On the palate the wine is full-bodied, deep and rock solid at the core, with a lovely tension between the minerality, the snappy acidity and the core of fruit. The finish is long, complex and racy, with excellent grip and pinpoint bubbles. (served from magnum) (Drink between 2008-2025)

John Gilman | 93 JGIncredibly sophisticated from the bouquet's first full toast, apple, thyme, meal, orange, even meaty notes. The fine steady bead, mouthcoating, creamy feel and deep vanilla, apple and earth flavors comprise a very complete statement about age-worthy Champagne. It's mature, and shows subtleties youthful wines can not, but it's still lively, and displays a wealth of life and spirit through the tangy flavored but smoothly textured finish. Drink now-2012.