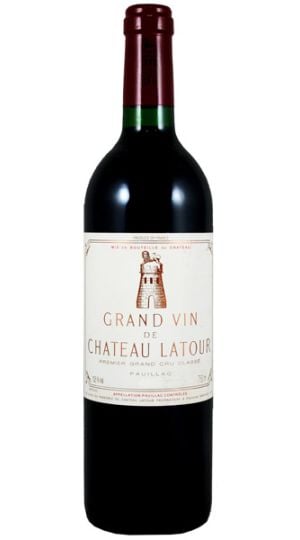 This is one of my favorite wines ever. Full-bodied, with layers of silky fruit and masses of currant, mineral and berry character. Amazing. It's a wine with perfect structure, perfect strength. It's 1961 Latour in modern clothes. It's hard not to drink it now. '89/'90 Bordeaux non-blind horizontal. Best after 2008.

Wine Spectator | 100 WSThen, the 1990 Latour arrives. Powerful and dense to the core, the 1990 possesses superb density for a wine of its age. Despite its considerable depth, the 1990 remains light on its feet for such a big wine. I imagine the 1990 Latour will drink well for another thirty years. What a wine.

Vinous Media | 98 AG(Château Latour) The 1990 vintage from Château Latour is a superb example of this ripe and more forward year, with the torrid growing season having put its imprimatur on the wine a bit in its slightly more forward and plush style, without ever impinging upon the classic Latour house style. The bouquet is tremendously deep and expressive, offering up scents of cassis, blackberries, tobacco, gravelly soil tones, a hint of violets, cedar and a blossoming topnote of cigar smoke. On the palate the wine is deep, full-bodied and simply packed at the core, with superb focus and grip, lovely complexity and a very long, ripely tannic and already fairly pliable finish. This wine has plenty of structure for the long haul, but it does not possess the classic sternness of vintages of Latour from the fifties or sixties, nor of wines made in the last decade or so. That said, it is probably the finest Left Bank wine of the 1990 vintage. (Drink between 2016-2060).

John Gilman | 96 JGThis is one of the more perplexing Latours to evaluate. It has plenty of sweetness as well as a gorgeous, rich fruitiness, but it lacks the firmness one finds in more recent great vintages such as 1996, 2000, 2003, 2005, 2006, and 2008. There is plenty of sweet, ripe currant fruitiness, abundant glycerin, and full body, but I’m still waiting for that extra nuance of complexity to emerge. It’s all there, but the wine still seems to be more monolithic than one would expect in a wine approaching 19 years of age. It is not the sure-fire winner I thought it was in its youth, but then again, I don’t have any reason to doubt that more complexity will emerge. Anticipated maturity: 2016-2035. Release price: ($1500.00/case)

Robert Parker | 95+ RPStill a young wine, with firm tannins that are less finely expressed than the Lafite at the same age and instead provide a more muscular presence in the glass, as is entirely within the Latour signature. The dominant flavours are cedar, tobacco, black cherry and cigar box, with black pepper spice on the close of play. Plenty of changes going on at Latour in 1990, with the estate sold the year before from the Pearson Group to Allied Lyons. This was the first year of the third wine Pauillac de Latour, further refining the selection of the main bottling. Drinking Window 2021 - 2036.