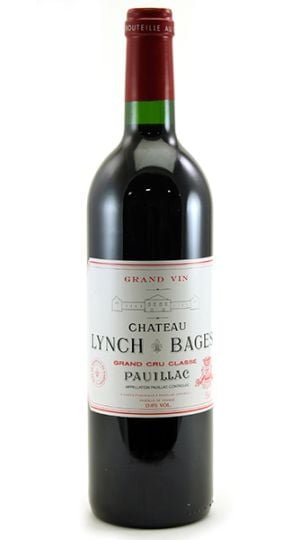 This magnificent Lynch Bages has been drinking well since the day it was released and it continues to go from strength to strength. The biggest, richest, fullest-bodied Lynch Bages until the 2000, the fully mature 1990 exhibits an unbelievably explosive nose of black currants, cedarwood, herbs and spice. The majestic, classically Bordeaux aromatics are followed by a full-bodied, voluptuously textured, rich, intense wine with superb purity as well as thrilling levels of fruit, glycerin and sweetness. This beauty should continue to provide immense pleasure over the next 15+ years.

Robert Parker | 99 RPThe 1990 Lynch-Bages remains the towering Pauillac it has always been, even if Jean-Michel Cazes personally prefers the 1989. It has a riveting, graphite-infused bouquet that is brilliantly defined, very focused and sharp as a razor-blade. Poured directly against the 1990 Lafite-Rothschild, this Fifth Growth beats it hands down. The palate is very well structured; this is an aristocratic Lynch-Bages with impressive grip after 28 years. There is a symmetry underpinning this wine, a sense of energy undiminished by the passing years, that makes this 1990 Lynch-Bages so compelling. Just awesome. Tasted during the Christmas Dinner at Noble Rot restaurant.

Vinous Media | 96 VMAromas of tar, currant and berries follow through to a full-bodied palate, with silky tannins and a long, long finish. Still not completely ready, but so good anyway.--Lynch-Bages non-blind vertical. Best after 2008. 35,000 cases made.

Wine Spectator | 94 WS(Château Lynch Bages) The 1990 Lynch Bages is a very good example of the vintage that shows off the differences between ’90 and ’89 quite well in its lack of mid-palate depth vis à vis the 1989 version. The nose on the 1990 Lynch is excellent, wafting from the glass in a blend of cassis, black cherries, a touch of saddle leather, gravelly soil tones, fresh herbs and plenty of toasty new wood. On the palate the wine is deep, full-bodied, complex and very long, with good, but not great depth at the core, moderate tannins and lovely length and grip on the complex finish. While approachable today, the 1990 Lynch could still do with a few years in the cellar to allow it to more fully blossom. It is a very good wine, but it does not possess the same sappy depth of the superior 1989 Lynch Bages. (Drink between 2016-2045)