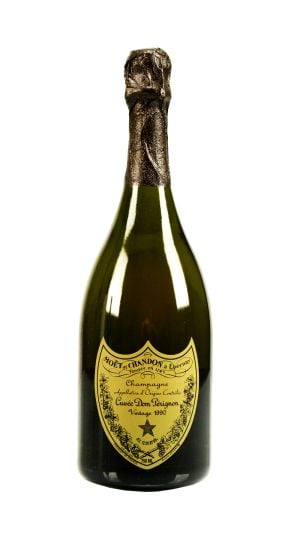 This is really incredible with orange peel, dried pineapple and flan. Exotic. Full body, round and savory. Crazy character at the finish of cooked pineapple and tart tartine. Gorgeous; can't believe it.

James Suckling | 99 JSThe profoundly rich 1990 Dom Perignon is a creamy-textured, full styled offering that loses none of its elegance in spite of its flavor authority. It will improve for 5-10 years, and appears capable of surpassing the fabulous 1985 and 1982. It seems obvious that the quality of the 1990 Champagne vintage is going to be remarkable, and the world-wide demand will be unprecedented. The message - buy them now!

Robert Parker | 96 RP(Moët & Chandon Brut - Dom Perignon (magnum) Champagne/Sparkling) This is a wine that I know extremely well from 750 ml and it's one that is beginning to tire though I hasten to point out that it's still enjoyable and just beginning to show signs of fatigue. However there are no such concerns with the same wine from magnum that remains magnificently fresh and while it's clear that the aromas are mature, that's not at all the same thing as describing the yeasty and baked apple suffused nose as tiring. There is equally good depth and vibrancy to the beautifully delineated flavors that are supported by a fine and firm mousse that allows the texture of a well-aged Dom to be easily appreciated. For my taste this has arrived at its peak though note well that it should easily be capable of effortlessly holding for years to come. (Drink starting 2015).

Burghound | 95 BHPale color. Youthful aromas of lemon, quince, pear, toast, spice, chalk and red berries. Big, sweet and seamless, if a bit clenched in the early going. A powerful, very young wine whose fruit builds slowly in the mouth and explodes on the finish. A charry note contributes to its complexity. Possesses amazing depth of fruit, but the high quality of this wine can most easily be seen today on the extraordinary finish. May ultimately merit a 95+ rating.

Vinous Media | 93+ VM(Dom Pérignon Brut (Moët et Chandon)) I had loved this vintage of Dom Pérignon well enough out of the blocks to buy a case for long-term cellaring, and though the wine has been thoroughly enjoyable over the years, it seems to me that it is now time to drink it up in regular-sized bottle, as it has matured at a fairly brisk pace, and like a lot of 1990 Champagnes, it is already probably starting to look over the far side of its plateau. The wine today is already showing a bit oxidative in style, but with plenty of complexity and still good structure for current consumption, but it certainly seems likely to start to slide in the coming years. The bouquet is a mature blend of toasted nuts, apple, peach, a bit of honey, lovely, chalky soil tones and incipient notes of new leather in the upper register. On the palate the wine is deep, full-bodied and still reasonably crisp, with fine focus, plenty of mid-palate stuffing, sound mousse and very good length and grip on the gently honeyed and fairly advanced finish. Given that other examples from the 1990 vintage, such as Clos des Goisses and Comtes de Champagne, are decidedly fresher than this wine, I would term this a bit of a disappointment, though this seems quite correct for the general vintage’s stage of evolution today and the wine remains quite tasty in its slightly decrepit style. I should note that there are reports of quite a bit of bottle variation with the 1990 Dom Pérignon, so perhaps there are still far better examples out there. However, I wish I had bought the 1985, rather than the 1990 for my own cellar! Drink up in regular-sized formats. (Drink between 2014-2020)