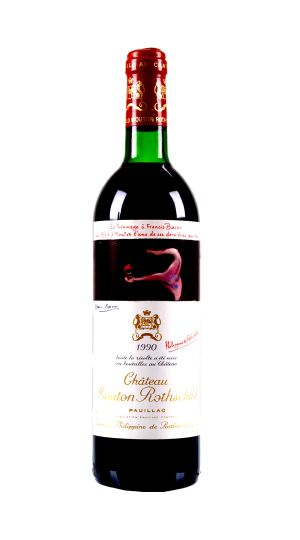 A time of serious changes at Mouton, with Baron Philippe de Rothschild passing away in 1988 after having overseen seven decades worth of harvests, and his longtime winemaker Raoul Blondin retiring in 1989. It was also three years before the introduction of Petit Mouton under Baroness Philippine (even Aile d'Argent the white wine didn't arrive until 1991). Does all of this explain why the 1990 has suffered with its reputation from the beginning? Certainly it is far more mature at this 31-year-checkin than the others in the tasting, with strawberry and raspberry notes rather than the darker fruits that you more usually find in great Pauillac, with clear tertiary notes of tobacco, rust and woodsmoke. I had a better bottle of this in December 2020, and also in October 2018, so do expect bottle variation and you just might get lucky, but this was not the wine of the night. Label artist Francis Bacon, with one of his last works. Harvest 18 September to 3 October. Drinking Window 2021 - 2030.

Decanter | 91 DECA less-than-extraordinary Mouton with licorice and sandalwood on the nose. But this is still lovely and easy to drink. Medium body, good fruit and soft tannins.

James Suckling | 90 JSNotorious for not living up to the estate’s nor the vintage’s reputations, I have to say this 1990 Mouton Rothschild was not looking nearly as bad as I was expecting. This was a hot, dry vintage, which can be a challenge for vines on such free-draining soils as the deep gravel-mounds composing the backbone of Mouton’s vineyards. The effect of the struggling vines is apparent in the wine, yielding less density and chewier tannins. Nonetheless, the terroir's pedigree clearly glimmers in the background.

The wine displays a brick color with subtle, compellingly elegant redcurrant jelly, dried cranberries and powdered cinnamon notes plus wafts of potpourri, dried figs, unsmoked cigars and dusty soil. Medium-bodied, it is notably far more delicately fruited than one would expect of Mouton, structured with bold freshness and a light chew of tannins before finishing on a mineral note. Indeed, it is skinny compared to great vintages, but it is aging gracefully. For readers who love those soft-spoken, more delicately expressed styles, this one’s for you!