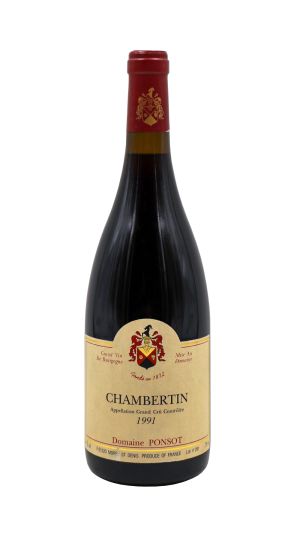 The 1991 Chambertin is one of the rare wines from this grand cru vineyard that justifies the price and mythical reputation. It is a great wine, with deep ruby color, and a splendid perfume of smoked meats, jammy black and red fruits, and Asian spices. Layers of supple, juicy, succulent fruit filled with glycerin, sweet tannin, and high alcohol make for a hedonistic, decadent mouthful of wine. It should drink well for at least 10-15 years. No matter how many wines I taste, or how long the days can be in damp, dingy cellars, it is hard to spit out wines such as Ponsot's Chambertin.

The perennially inconsistent Domaine Ponsot has, along with the Domaine Leroy, turned in the vintage's most extraordinary performances. This domaine made mind-boggling 1990s, but a strong case can be built that Laurent Ponsot and his father have fashioned 1991s that are as rich and profound as their 1990s. Certainly their yields were significantly lower. In fact, only Domaine Leroy had yields as low as Ponsot's average of 16 hectoliters per hectare (less than 1 ton per acre). Keep in mind that 1 ton per acre on 8,000-10,000 vines per hectare is considerably different than 1 ton per acre from new world vineyards that have 1200 vines per hectare. In the top grand crus, such as Chambertin, Clos St.-Denis, and Clos de la Roche, Ponsot's yields were between 9-13 hectoliters per hectare - and from exceptionally old vines. This domaine abhors new oak, uses no SO2, and bottles its wines with no fining or filtration, utilizing only nitrogen gas to protect the wine as it is moved from cask to bottle. Bravo to the Ponsots for making some of the greatest red burgundies I have ever tasted - and they have done it in back to back vintages!