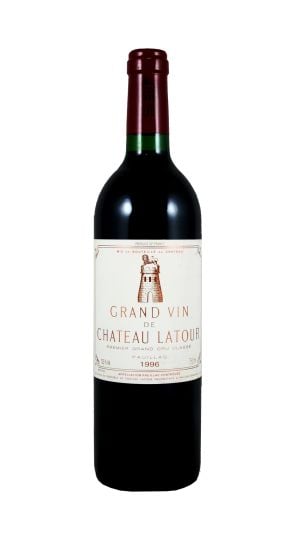 A spectacular Latour, the 1996 may be the modern day clone of the 1966, only riper. This vintage, which is so variable in Pomerol, St.-Emilion, and Graves, was fabulous for the late-harvested Cabernet Sauvignon of the northern Medoc because of splendid weather in late September and early October. An opaque purple color is followed by phenomenally sweet, pure aromas of cassis infused with subtle minerals. This massive offering possesses unreal levels of extract, full body, intensely ripe, but abundant tannin, and a finish that lasts for nearly a minute. Classic and dense, it displays the potential for 50-75 years of longevity. Although still an infant, it would be educational to taste a bottle. Anticipated maturity: 2015-2050.

Robert Parker | 99 RPInky black even at 25 years old. A hugely impressive wine, with plenty of chewy tannins still in play, ripples of cassis, bilberry and blackberry fruits, set against olive paste, charcoal and eucalyptus. Things have softened around the edges no question, this is still full of life with decades ahead of it, but this is a great moment to start enjoying its promise. Textbook Latour in many ways, for its austerity and power, and its serious character that is underlaid by concentrated pleasure showcasing 'the gift of sub-gravel clays'. 56% of overall production in the first wine. 1% Petit Verdot completes the blend. Last released in 2014 as an ex-château wine. Drinking Window 2023 - 2040.

Decanter | 98 DECFabulous aromas of crushed raspberries, plums and blackberries. Mind-blowing nose. Full-bodied, with soft and silky tannins and a long caressing finish. Hard not to drink now, but leave it alone.--'95/'96 Bordeaux retrospective. Best after 2010. 17,000 cases made.

Wine Spectator | 96 WS(Château Latour) The last bottle of the 1996 Latour that I tasted was part of a mini-vertical that was one of the most ingenuous and generous flights of wine I have tasted in a long time, as my friend paired the 1996 Latour up with the 1896 Latour at a double blind tasting in February of this year! Needless to say, the one hundred years’ worth of bottle age between the two vintages was sufficient to convince none of us that it was the same property, but both wines acquitted themselves beautifully. I was surprised at how well the 1996 Latour was starting to show, given that it is a classically-styled Latour from a very tannic and powerful vintage in the Medoc, but the wine is already starting to drink with some generosity. The bouquet is superb, offering up scents of black cherries, cassis, cigar ash a touch of tariness, gravelly soil tones, smoke and a whisper of balsam bough in the upper register. On the palate the wine is deep, full-bodied and rock solid at the core, with firm, still plenty chewy tannins, fine focus and balance and a very long, nascently complex and quite promising finish. This is nowhere near as unapproachable as I would have supposed the combination of Latour and 1996 would be, but I would be inclined to give it another decade in the cellar and really let the fireworks get rolling properly. (Drink between 2027-2085)

John Gilman | 94+ JGThis was a wine that was very hyped and always excellent. But now it shows the reality of the wet and cold vintage. Lots of basil leaf, lemon grass, and sage aromas with currant undertones. Medium body, fine tannins and a fresh finish. Now at its best. Drink up.

James Suckling | 94 JSThe 1996 Latour is a wine that I often find overrated and did not achieve everything that might have been possible in this favourable growing season. That said, this might well be the best of around two dozen bottles I have encountered over the years. As usual, the 1996 is decidedly austere at first, standoffish, looks down its nose at you. Yet it coalesces with time and develops engaging cedar-scented black fruit tinged with pencil box and a touch of iris with time. The palate (again) is a little muted at first but it soon found its voice and evolved very fine tannin allied with a crisp line of acidity. It is not quite as demonstrative as it was even just a couple of years ago, gained some detail and perhaps it will continue to meliorate. Very fine, very fine indeed - but not a patch of say, the Château Margaux or perhaps even Léoville Las Cases. Tasted at the International Business & Wine Latour dinner at Ten Trinity.