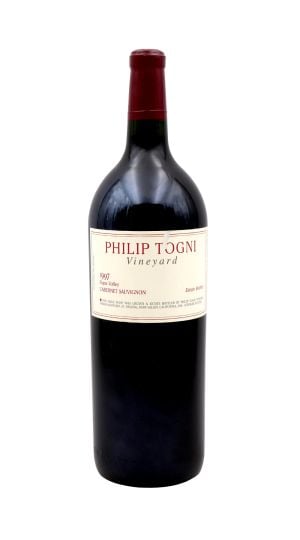 98
RP
Be the first to review this product
As low as $845.00
Product ID
1997-philip-togni-cabernet-sauvignon
Add to Wish List Add to Compare
Details

The 1997 Cabernet Sauvignon has to be one of the great buys left for profound Napa Cabernet. He’s done the aging for you, and of course the wine is still an adolescent in terms of aging potential. Brilliant notes of cedar, spice box, cassis, smoke, and licorice soar from the glass, as if this wine were pretending to be a first-growth Pauillac. Full-bodied, powerful, still with a boatload of tannin to resolve, and just a faint lightening of the dense purple color at the rim, this is a brilliant wine from a vintage that produced relatively quick-evolving wines, but no such thing is tolerated at Philip Togni. This is a great Cabernet Sauvignon with the exuberance, purity, and richness of fruit that Napa provides, but with a Bordeaux structure that Togni, with his Bordeaux upbringing, somehow builds into the wine. This wine will continue to drink well for at least another 30+ years.

Robert Parker | 98 RPI have always adored Togni's 1997 Cabernet Sauvignon Estate because it captures both the natural intensity of the year and the vibrancy that makes these wines so compelling. Powerful and explosive, with huge density, the 1997 hits the palate with waves of dark fruit intermingled with savory herb, charcoal, tobacco and grilled herb overtones. Even with all of its intensity, the 1997 has enough textural richness to drink for another 10-15 years, maybe more, as there is still quite a bit of structure and tannin. Hints of cedar, tobacco, crushed leaves and game add the closing shades of nuance.

Vinous Media | 97 VM(Cabernet Sauvignon- Philip Togni Vineyard) The 1997 cabernet sauvignon from Philip Togni is one of my absolute favorites from him in the decade of the 1990s. The bouquet is really starting to blossom and show a great core of blossoming mountain fruit, as it delivers a fine blend of sweet cassis and black cherries, tobacco leaf, just a whisper of the chipotles to come, cigar smoke, fresh herbs, dark soil tones, a bit of currant leaf and a deft framing of new oak. On the palate the wine is deep, full-bodied and beautifully balanced, with a rock solid core, ripe, resolving tannins and great grip on the very long and perfectly poised finish. Great juice that is still a few years away from its apogee. (Drink between 2019-2050)

John Gilman | 95 JGDefinitely an earthy, beefy and leathery red, but that's just part of the story as its mineral, currant, berry and cedar notes grow in complexity and turn elegant, yet retain a hearty, rustic edge. Drink now through 2010. 2,230 cases made.