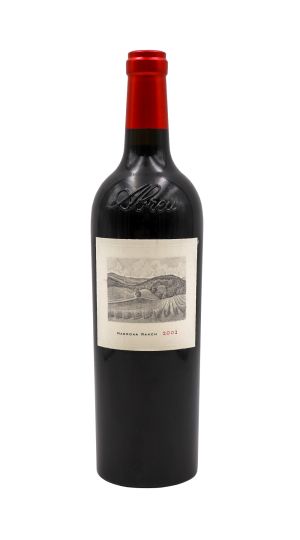 At age 16, the 2002 Madrona Ranch has shed some of its baby fat and has gained incredible complexity and depth, yet it's still young, exuberant, and flamboyant in every way. Offering up a heavenly perfume of blackcurrants, forest floor, menthol, tobacco, and spring flowers as well as hints of new saddle leather, this beauty is seamless and elegant on the palate, with ultra-fine tannins, the density and depth that's the hallmark of this estate, and perfect integration of its fruit, tannins, alcohol, and acidity. This is thrillingly singular stuff from Brad Grimes that could come from nowhere else in the world, and it's one of the great, great wines from Napa Valley.

Jeb Dunnuck | 100 JDThe 2002 Madrona Ranch possesses an opaque blue/purple color as well as an extraordinary, enveloping, massive aromatic profile consisting of spring flowers, charcoal, lead pencil shavings, blueberries, raspberries and blackberry liqueur. In the mouth, there is sensational texture, full-bodied intensity, and terrific freshness, precision and vibrancy, despite what is undeniably a massive, rich, intense wine that should age well for another 25-35 years. The 2001s were about as profound as I have ever tasted from Abreu, but the 2002s may be even sexier since they are slightly more evolved.

Northern California’s superstar viticulturist, David Abreu, makes between 400 and 600+ cases of a number of wines from various vineyards he owns throughout the valley. Since the mid-1990's, the Abreu wines have ranked in the top half dozen or so of Napa Valley Cabernet Sauvignon-based wines. To his original Madrona Ranch holdings in St. Helena, Abreu has added an adjacent vineyard called Capella. He also co-owns with Ric Forman the Thorevilos Vineyard situated behind the Meadowood Resort. There are 500 cases of the 2002 Madrona Ranch. While the blend is never specified, it is dominated by Cabernet Sauvignon blended with a large percentage of Cabernet Franc, a varietal that both David Abreu and his winemaker/manager Brad Grimes adore. They achieve a level of aromatic intensity and complexity in their wines that few in the world can match. If you have access to these world class wines, don’t hesitate to purchase them if you can afford them - they are that special.