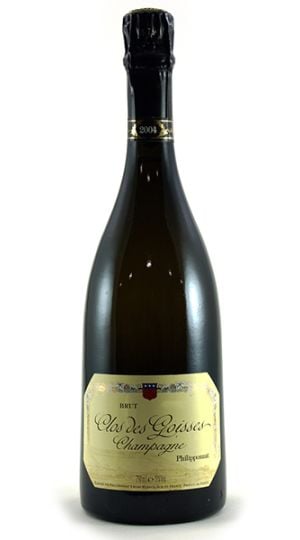 97
JG
Be the first to review this product
As low as $435.00
Only %1 left
Product ID
2002-philipponnat-clos-des-goisses
Add to Wish List Add to Compare

(Philipponnat Clos des Goisses Brut) These most recent two bottles of the 2002 Clos des Goisses were both magnificent. The wine is starting to really drink with great style at age twelve, and though it remains early days in the evolution of this wine, it is really already getting irresistible. The deep, pure and wide open bouquet shows quite a bit of the exotica that defines this wine at full maturity, as it soars from the glass in a mélange of ripe pears, musky floral tones, kaleidoscopic minerality, brioche and plenty of smokiness in the upper register. On the palate the wine is deep, full-bodied and magically complex, with bottomless depth at the core, laser-like focus, bright, zesty acids, pinpoint bubbles and simply stunning length and grip on the impeccably balanced and wide open finish. Intuitively, I know this is still early days for the 2002 Clos des Goisses, but for those wise enough to have a substantial cache of this wine in the cellar, it is a far cry from a crime to be opening bottles now! Sheer brilliance. (Drink between 2014-2050)

John Gilman | 97 JGThe 2002 Clos des Goisses dazzles from start to finish. A huge, tropical Goisses, the 2002 pulses with exotic, tropical fruit wedded to a real sense of textural vinosity. Honey, almonds and yellow stone fruits are some of the many notes that blossom in the glass. The 2002 is just entering the very early part of its plateau of maturity, but it will continue to develop further nuance over the next 20-30 years. The level of complexity and overall sumptuousness make the 2002 nearly impossible to resist today. Disgorged November 2011.

Antonio Galloni | 96 AGThe flagship 2002 Brut Clos des Goisses is simply stunning in this vintage. Seamless, ripe and beguiling, the 2002 is pure harmony in the glass. Dried pears, apricots, flowers, red berries and spices are some of the many notes that inform this towering, aristocratic wine. At once vertical yet endowed with serious length, the 2002 stands out for its breathtaking balance and overall sense of harmony. Layers of fruit built to the huge, creamy finish. This is a great showing from Philipponnat. The 2002 was disgorged in June 2011. Anticipated maturity: 2012-2032.

I tasted a wide range of fabulous wines with Charles Philipponnat this year. Over the years, the knock on Philipponnat was that few of the entry and mid-level wines were consistent in quality with the flagship Clos des Goisses, one of the true icons of Champagne. I find that much less of an issue these days. One criticism I do have with Philipponnat is with the roses, which generally are made by adding still red wine to the blanc versions of those same Champagnes. While this method, called ‘assemblage,’ is quite common in Champagne, it is much less typical of estates that aspire to make world-class Champagnes, as Philipponnat does. At most of the top houses, the roses are made as stand alone wines, in other words, conceived and executed from the bottom up as their own entities rather than based off another wine.