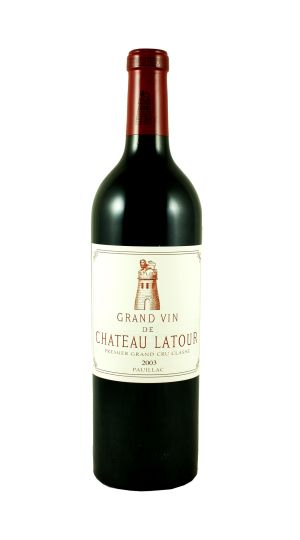 Administrator Frederic Engerer says the 2003 is “the sexiest Latour ever made.” He also described it as “the 1990 without any brettanomyces.” I loved this wine from the barrel and was fortunate enough to be able to purchase a small quantity, enjoying every bottle I have had. A profound example of Chateau Latour, the full-bodied, opulent 2003 is already performing well at age eleven, which is somewhat atypical. The pH is a relatively high 3.8, which also indicates low acidity. The wine is very ripe, but not over-ripe, offers great freshness, and lots of creme de cassis and camphor as well as hints of blackberries and chocolate. Dense, thick and unctuously textured, this staggering Latour is undeniably the most sumptuous, opulent wine made here since the 1982 or 1961. Drink it over the next two decades.

Robert Parker | 100 RPFascinating nose of fresh flowers, currants, and sandalwood. Full bodied, with a seamless core of fruit that goes on and on. Love the polished tannins and the beauty here. A powerful and rich wine with so much class and finesse for such a hot vintage. Pull the cork after 2016.

James Suckling | 99 JSIntense aromas of blackberry, licorice, currant and mineral. Full-bodied, with very well-integrated tannins and a long, long finish. Very refined and beautiful. Goes on for minutes. This reminds me of the fabulous 1996. But even better. Best after 2012. 10,000 cases made.

Wine Spectator | 98 WSThe 2003 Latour remains a redoubtable First Growth and a testament to its terroir that manifested such a great wine in a challenging growing season. You could argue that it does not disguise the heat of that notorious summer as deftly as the 2003 Montrose since there is still a touch more volatility here than other vintages. But there are gorgeous notes of black cherry, black truffle, cedar and a touch of cooked meat. The palate is full-bodied with saturated tannin. The acidity is very finely tuned considering the season and there is plenty of glycerine towards the sumptuous finish. Maybe it is more a great 2003 than a great Latour, but there are few recent vintages that are so delicious. Tasted at the International Business & Wine Latour dinner at Ten Trinity.

Vinous Media | 97 VMWhat makes a great Latour is a sense of completeness, of restrained power and of levels of complexity which the other first growths rarely achieve. That's why Latour 2003 is a great wine.