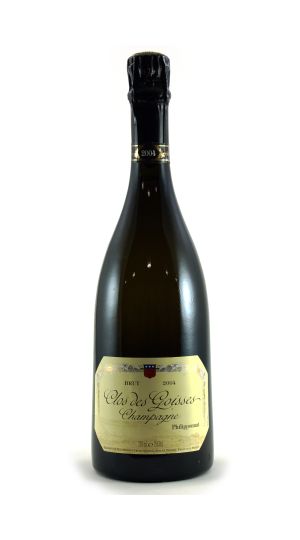 97
AG
Be the first to review this product
As low as $290.00
Only %1 left
Product ID
2004-philipponnat-clos-des-goisses
Add to Wish List Add to Compare

The 2004 Clos des Goisses is dense and powerful in the glass, with all of the pure, unbridled energy that has always been such a signature here. Hints of lemon peel, mint, spice and crushed rocks emerge with time in the glass, but, despite its considerable beauty and unquestioned pedigree, the 2004 is frankly years away from delivering the full Clos des Goisses experience. Disgorged February 2013.

Antonio Galloni | 97 AGFrom their iconic steep, south-facing, riverside vineyard in Mareuil-sur-Ay - acquired in 1935 - Philipponnat's strikingly beautiful 2004 Brut Clos des Goisses betrays no suggestion of alcoholic weight or opacity such as one might associate with an especially warm, fast-ripening vineyard. On the contrary, this is a bottling that combines silken feel with delicacy, refreshment, and utmost transparency to nuance. Chamomile, mint and lily-of-the-valley don't just turn heads from the rim of the glass; they waft through this wine's entire palate performance, against a greenhouse-like background of diverse if elusive flowering and leafing things. Salivary gland-tugging salinity and hints of chalk suffuse a fruit matrix of white peach, lime, red raspberry and red currant whose juicy, subtly crunchy expressions put me a bit in mind of certain supreme Nahe Rieslings. This site's reflection in the Marne River is itself iconic, but its reflection in your glass will prove kaleidoscopically spellbinding. That effect persisted during the four days I had the pleasure of following this 2004, and I suspect that subsequent bottles will prove worth following for at least a decade.

The house of Philipponnat - which owns 44 prime acres in and around Mareuil-sur-Ay, its base of operations ever since having completed a new press house and cellar there in 2004 - is headed by Charles Philipponat, although it's owned by the group that controls Champagne Bruno Paillard Philipponnat. This house's Clos des Goisses estate vineyard is justly renowned, but on the occasion of my recent tasting, their extra brut "1522" - named for the year in which the first Philipponnat began farming vines, in Ay - proved almost as compelling.

Robert Parker Wine Advocate | 96 RP(Philipponnat Clos des Goisses Brut (Disgorged November 2013)) The 2004 Clos des Goisses is one of the very few vintages here that has undergone malolactic fermentation, as the wine undertook this decision on its own, and the malo took place in bottle while the wine was resting on its lees and awaiting its dosage for the secondary fermentation. Given the raciness of the 2004 vintage in general, the full malo here is hardly to be noticed, and without Charles Philipponnat having told me about this, I doubt that I would have ever noticed. The wine has opened up a bit since I last tasted it at the domaine at the end of March, and this is destined to be a great vintage of Clos des Goisses in the fullness of time. The superb bouquet shows off outstanding depth and nascent complexity in its constellation of apple, tart orange, a touch of cranberry, complex, youthful minerality, plenty of smokiness and early signs of the wine’s classic nuttiness already emerging in the upper register. On the palate the wine is pure, full-bodied and rock solid at the core, with outstanding focus and grip, very refined mousse and simply superb length on the poised and perfectly balanced finish. I did not know 2004’s telltale touch of herbacité here in New York that I noted in Mareuil in March, and I now think that this element was more a function of its relatively recent disgorgement (only four months previous when I first tasted it), rather than a signature in this vintage of Clos des Goisses. This will be a great wine. (Drink between 2020-2070).

John Gilman | 95+ JGThis is back to Clos des Goisses' traditional composition of two-thirds Pinot Noir and one-third Chardonnay. Beautifully ripe and aromatic, the Pinot adds dimension and breadth, but loses nothing in precision, to the taut mineral Chardonnay. An extremely graceful wine in perfect balance for current drinking - enjoy with scallops, roast turbot with cepes, or a mature Jura cheese. Dosage 4.25 g/l (extra Brut). Drinking Window 2018 - 2030.