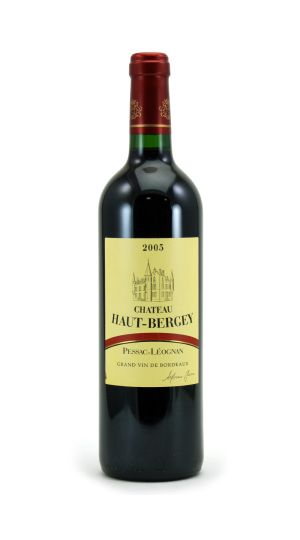 Aromas of mineral, blackberry and licorice lead to a full body, with lots of racy tannins and a long, flavorful finish. There's plenty of character, with a polished, refined style, yet tannic. Best after 2011. 9,830 cases made.

Wine Spectator | 91 WS(Château Haut-Bergey) Château Haut-Bergey was one of the most pleasant surprises of the entire 2005 tasting. Michel Rolland had consulted here for some years in the past, but the château owner had decided that he was dissatisfied with the direction of the winemaking under Monsieur Rolland’s consultancy, and he is happily no longer part of the equation at Haut-Bergey. The result in 2005 is one of the best wines made in the region of Pessac-Léognan that I tasted, and clearly one of the real sleepers to be looked out for in this vintage. The bouquet is deep, pure and classic, as the wine jumps from the glass in a blaze of cherries, red plums, tobacco, a lovely base of Graves soil tones and a judicious framing of vanillin oak. On the palate the wine is medium-full, focused and tangy, with lovely intensity of flavor, ripe tannins and good length and grip on the classically shaped finish. The wine is a blend of sixty-five percent cabernet sauvignon and thirty-five percent merlot and was raised in fifty percent new oak in 2005. Despite my comments about malo in barrel in the introduction, this wine has managed to show some fine elements of terroir despite having had its malolactic done in barrel. Lovely wine and a great value. (Drink between 2010-2035)

John Gilman | 90 JGCharcoal, espresso roast, blackcurrants and spice are all present in this medium-bodied, nicely concentrated, relatively evolved and precocious Haut-Bergey, which is just now attaining its plateau of maturity. Soft tannins and an attractive plushness are followed by a wine capable of drinking well for another decade or more.

Robert Parker | 90 RPGood full, deep red. Superripe aromas of redcurrant, plum, cherry, flowers and beefsteak tomato. Sweet, fat and full, but less wild and expressive today than the 2006. Distinct notes of milk chocolate and roasted berries. The major tannins currently cut off the wine's fruit. Impressively rich but lacks a spark: is this too ripe for its own good?