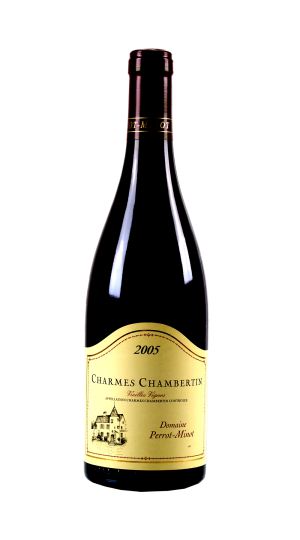 94-95
RP
Be the first to review this product
As low as $599.00
Only %1 left
Product ID
2005-henri-perrot-minot-charmes-chambertin-vv
Add to Wish List Add to Compare
Details

From 65-year-old vines in the highest portion of this appellation (bordering Rousseau’s Chambertin), Perrot-Minot’s 2005 Charmes Chambertin Vieilles Vignes offers pure, liqueur-like blackberry, black truffle and lily-like floral aromas, comes onto the palate with sumptuous depth and richness of fruit backed by beef marrow, creamy texture yet persistently fresh fruit, pungent brown spices, and amazing finishing intensity. This has what certain Australian wine makers would call “fruit weight,” yet without an impression of actual weight on the palate. While there is less refinement than in the Chapelle, there is formidable raw richness and intensity in this wine probably best left untouched for at least a decade.

Robert Parker Wine Advocate | 94-95 RPRuby-red. Black fruits and minerals on the nose. Taut and minerally in the mouth, offering a tight core of intense black fruits. Seems more massive and more crystalline than the Chapelle thanks to its superb inner-palate energy. This, too, is extremely backward, finishing with building tannins, a powerful impression of spine and great persistence. Perrot-Minot told me this parcel is adjacent to Rousseau's Chambertin and shares the same rocky soil.

Vinous Media | 92-95 VM(Domaine Perrot-Minot Charmes-Chambertin Grand Cru Red) This is extremely ripe with blueberry and mocha aromas trimmed in a subtle touch of oak that precede the generous, sweet and full-bodied flavors that offer good intensity but not the depth and complexity of the best of the grands crus. Still, this is a dramatic and bold effort with terrific length and the complexity may develop with bottle age. (Drink starting 2013).