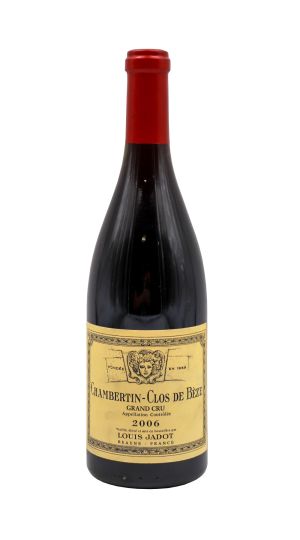 96
VM
Be the first to review this product
As low as $415.00
Only %1 left
Product ID
2006-louis-jadot-chambertin-clos-de-beze
Add to Wish List Add to Compare
Details

Bright, full red. Vibrant but brooding nose shows a medicinal austerity to the pungent aromas of raspberry, flowers and botanical herbs. Penetrating, high-pitched and brilliantly delineated, with uncanny energy and lift to the red berry, floral and mineral flavors. This saturates every square millimeter of the palate, then explodes with perfume on the expanding aftertaste. The overall impression is of pure soil-driven energy in a rather uncompromising style, but when I drank the second half of my bottle two days later with food, it showed a deep cherry flavor and compelling sweetness. Splendid Clos de Beze.

Vinous Media | 96 VMThe 2006 Chambertin Clos de Beze is in another league from Jadot's other 2006 vintage Chambertin grand crus, or for that matter any wines that went before it in that collection. A complex and classic Clos de Beze nose of rose petal, black raspberry, peat, licorice, dark chocolate, and smoked meats leads to a correspondingly multi-faceted palate of silken textural refinement, underlain by savory, saline minerality. In the best manner of the vintage, this marries soothing and invigoration, concentration and elegance, finishing with lift and refinement as well as riveting, vibratory interplay and extraordinary reach. It should be exciting to plug into a bottle of it anytime over the next 15 years, if not longer.

Jacques Lardiere testifies that while there was more widespread rot of Pinot Noir in 2007 than in 2006, the latter was more insidious and challenging as it was less evident on the surface of the berries, and often hidden within the grape clusters. That said, he confirmed the observation of many other growers that sorting out under-ripe berries was at least as formidable a task as removing rot. The results here this year speak to the success of Jadot's rigor, and even from the Cote de Beaune there are many wines in this collection that in their sometimes understated, but also often texturally more refined way have nothing to fear from comparison with the 2005s at a similar state. (At ten years of age, it will no doubt be a different matter.) Lardiere claims that the beneficial effects of biodynamic procedures are being felt now in certain wines from vineyards where he began employing them after being impressed by what he took to be their healing efficacy in the aftermath of 2004 hail. No other vintage, he says, comes to mind that compares with this one for its combination of refinement and complexity with youthful accessibility. When pressed, he hazards some comparison to 2000 and 2001, but adds that the best 2006s are better. That their importer has long owned the controlling interest in Jadot may permit them unusual flexibility in pricing for the American market. What's certain is that the suggested retails publicized for their 2006s – most, slightly beneath those of the 2005 vintage – look remarkably low when compared with those reached in the last several years by other top Burgundy producers. A Jadot grand- or premier cru bottling is often priced like other growers' respective premier crus and village wines, rendering this enormous operation a source not only of continued consistently high quality and frequent distinction, but also of rare good value in red Burgundy. (There are several different domaine distinctions for Jadot wines, and of course some – albeit a diminishing number – are based on or incorporate contract fruit or purchased juice. But since the labels all display an easily recognized common Jadot identity, and since Jadot often exercises tight control over or enjoys very long-standing contracts on fruit that informs their negociant business, I have not noted these distinctions as part of each wine's description, but only occasionally – if deemed especially relevant – in the text of my tasting note).

Robert Parker Wine Advocate | 95 RPHere the nose is as reserved as the Latricières and only grudgingly gives up glimpses of the spicy and earthy red pinot fruit nose that is quite cool with obvious minerality, which continues onto the textured, intense and nervy big-bodied flavors that are textured and classy with highly sophisticated tannins on the long finish. Despite the reserved character of the nose, I was very pleasantly surprised at the relative accessibility this already displays due to the ample buffering sap yet make no mistake, the '06 Bèze will successfully age for years. A knockout that is noticeably better in-bottle than it originally showed from cask.