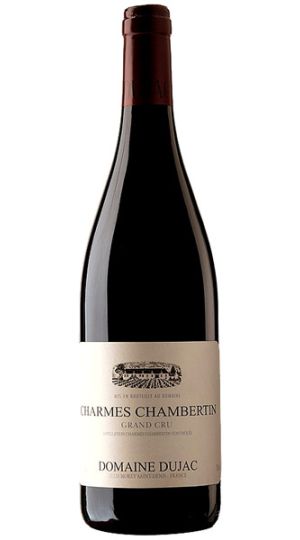 (Domaine Dujac Charmes-Chambertin Grand Cru Red) Here the nose displays both upper and lower register aromas of elegant red berry fruit, floral notes and plenty of Gevrey-style earth plus a hint of the sauvage that carries over to the intense yet supple and detailed medium-bodied flavors that are balanced, complex, sappy and impressively persistent. A Charmes of refinement and purity with enough youthful austerity present to necessitate waiting at least a few years before cracking one. (Drink starting 2023)

Burghound | 93 BHCharred meats and dark berries mingle on the nose and firmly- yet finely tannic palate of Dujac’s 2008 Charmes-Chambertin (which I last tasted very shortly before it was bottled). Blackberry, dark cherry, black pepper, and strongly cyanic cherry pit notes add to the unusually low-toned, almost brooding and unshakably persistent carnal intensity of a Charmes that could at most be faulted only for not literally living up to its name, but one that promises a decade or more of fascination and ought probably to stay in the cellar for the next 4-6 years.

The Dujac 2008s were not racked until last December, and bottling took place January through March. “The malic acid numbers were high-ish, but not significantly higher than in, say, 2006 or 2001,” says Jeremy Seysses in an effort to explain what he admitted were “for us, excessively late malos. I have a feeling it was a lack of nutrients that were wash out,” he continues, since, after all, “it rained a lot in 2008” with, he adds, “poor fruit set proving to be the vintage’s saving grace. I think we would actually have had less to harvest (i.e. worth keeping) if we had had a better fruit set. There was rot, but can you find it in any of the wines? That’s a credit to how far Burgundy has come along in terms of sorting” (which Dujac does exclusively in the vineyard, not on sorting tables – the name of their U.S. importer ironically notwithstanding). “I didn’t love my lack of options in 2007,” says Seysses of the preceding season, “so we picked early – earlier even than in 2003.” In vinification “we decided not to force too much, and just to keep it charming,” which is exactly how I thought the wines turned out. “At Domaine Dujac, we’re never been that attached to deep color, so we’re quite tolerant (in that regard), and the least thing we wanted to do was make hard wines. I de-stemmed more (than usual, or than in 2008). The fruit felt fragile, so in barrel I kept the wines under a bit more free sulfur than usual, which reinforced their lightness.” Seysses opines that 2007 was not a year in which old selections displayed their overall superiority to clones, because “if yo(‘re Pinots) were riper earlier, you were ripe while it was raining,” whereas in 2008 you could scarcely get too much ripeness.

Robert Parker Wine Advocate | 92-93 RPGood deep red. Very ripe, brooding aromas of medicinal black cherry and licorice. Then sweet, dense and concentrated but backward, showing a savory quality to the black cherry fruit. Less sweet on the chewy back end than the nose would suggest. Finishes with slightly tough tannins that will require patience. This and the Beaux-Monts finished their malolactic fermentation especially late and are tough going today.