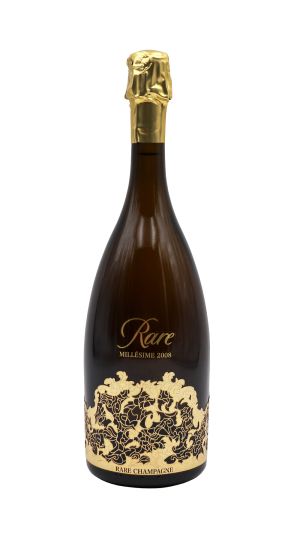 97
WS
Be the first to review this product
As low as $179.00
Only %1 left
Product ID
2008-piper-heidsieck-cuvee-rare
Add to Wish List Add to Compare

Like a stallion out of the gate, this shows an initial explosion of power, in the form of mouthwatering flavors and fine texture, before quickly settling into an elegant gait. The racy acidity is seamlessly knit, buoying the lacy mousse and flavors of cassis, toasted brioche and tangerine, with accents of candied ginger, hazelnut and fleur de sel lingering on the long, creamy finish. Drink now through 2035. 2,000 cases imported.

Wine Spectator | 97 WSA lively first nose of candied lemon, guava, also a hint of lime. With aeration, notes of almonds and almond flowers come to the fore. On the palate, there is a nervy tension that energises its fine, crystalline texture. This is an upright and elegant Champagne whose long, airy finish is mouthwatering. After some time in the glass, it evolves towards notes of smoke, flint and vanilla. A sumptuous Champagne. Disgorged: November 2019. Dosage: 9g/L. Drinking Window 2021 - 2040.

Decanter | 95 DECThe newly released 2008 Brut Cuvée Rare is very promising, unwinding in the glass with a youthfully reserved nose of citrus oil, crisp green apple, freshly baked bread, iodine and oyster shell, as well as some rather herbaceous characteristics that depress my score a little, even if I suspect that they will resolve with a bit more bottle age. Medium to full-bodied, incisive and tightly wound, if the 2006 vintage was gourmand and demonstrative, the 2008 is slower to show all its cards. Built around racy acids and complemented by a pillowy mousse, this rendition of Cuvée Rare will reward a few years more on cork.