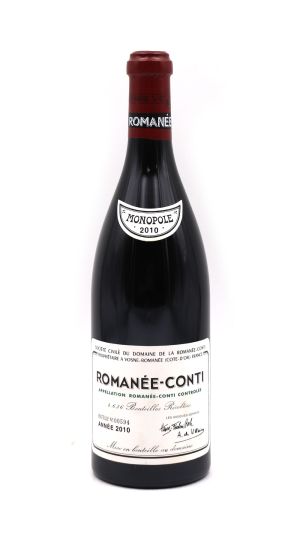 A discreet wine of fluidity, energy and a fine, filigree texture. This combines depth, power and intensity with delicacy and persistence. A wonderfully long, graceful finish. Drinking Window 2018 - 2030.

Decanter | 100 DEC(Domaine de la Romanée-Conti La Romanée-Conti Grand Cru Red) This is also intensely spicy with a similar array of highly restrained but exceptionally complex floral and cool red and black berry fruit aromas. There is a real sense of focused power to the beautifully well-delineated, pure and highly nuanced, multifaceted medium-bodied flavors wrapped in a deep reserve of dry extract before culminating in a breathtakingly persistent finish replete with the hallmark youthful austerity. Like all of the great vintages of this most famous of burgundies, it is almost inconceivably spherical with a Zen-like sense of harmony. I could taste this hours later, and like the '10 La Tâche, this is not an especially powerful vintage for Romanée-Conti, but it should be one of the all-time greats in due time. In short, young burgundy just doesn't get any better than this. (Drink starting 2030).

Burghound | 99 BHA combination of power and finesse, featuring explosive aromas and a complex mélange of flowers, spice, mint, strawberry and wild cherry flavors. Displays a sweetness not evident in the other DRC reds, with a silky texture and amazing harmony, all supported by refined tannins.--Non-blind 2010 DRC tasting (March 2013). Best from 2017 through 2040.

Vinous Media | 98+ VMIt’s fascinating to taste the 2010 Romanee-Conti. It is as if all of the preceding wines are subsets of the Romanee-Conti, but in the Romanee-Conti we find all of the qualities that make the other wines so distinctive in one marvelously complete Burgundy. Aromatics reminiscent of Romanee St. Vivant make an appearance, followed by the sweetness that can only be La Tache, then the structure of Richebourg, all wrapped into the total elusiveness of Romanee-Conti. I am reminded of my university studies in music. There are some compositions that are so profoundly moving because they only point out the futility in trying to truly understand them. Some things remain beyond the full grasp of the human intellect. Romanee-Conti is the vinous equivalent. Anticipated maturity: 2030-2060.

I tasted the 2010s twice from barrel, once in the summer just as the wines were about to be racked and then again during my early December visit. On both occasions the wines were stellar. Like virtually all of his colleagues, co-manager Aubert de Villaine was surprised by the level of the 2010s given all of the challenges of the growing season. I could repeat everything de Villaine told me, but there is no better source than the man himself, so readers who want to learn more about the 2010 harvest may want to take a look at my interview with de Villaine on www.erobertparker.com. Overall, I am very impressed with the 2010s with the exception of the Corton, which appears to be a notch or two below the 2009. The 2010 that most greatly exceeds its appellation and historical level of quality is the Echezeaux. I also tasted the 2010 Vosne-Romanee Cuvee Duvault-Blochet but the domaine had not yet decided if the wine would be released. I will report on the 2009s in our April issue.