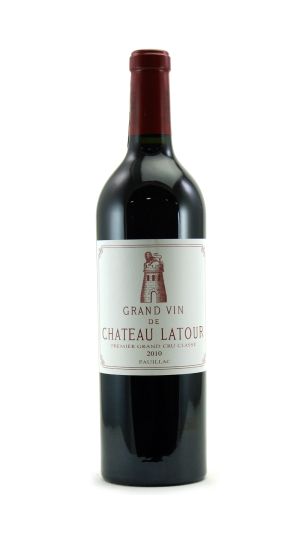 I get the same peony and violet aromatics here as I did in Forts de Latour. This is powerful, muscular, not even getting close to being ready. The tannins crowd in from the mid palate onwards, extremely physical in the way they make their presence felt. Behind them, if you give the wine enough time in the glass, it gives black pepper spice, pencil lead, slate and compressed earth, along with cassis, bilberry and all the tight compact dark-berried fruits you can think of. Don't even consider this for another five years at least. This is a monumental Latour and a flashing signpost for how good this vintage is in Pauillac. Drinking Window 2025 - 2050

Decanter | 100 DECThe aromas of flowers such as roses, violets and lilacs jump from the glass then turn to dark berries such as blueberries and blackberries. It's full-bodied, with velvety tannins and dense and intense with a chocolate, berry and currant character. This is juicy and rich with wood still showing a bit, but it's all coming together wonderfully. Muscular yet toned. Another perfect wine like the 2010. Try in 2022.

James Suckling | 100 JSOne of the perfect wines of the vintage, Frederic Engerer challenged me when I tasted the 2010 Latour at the estate, asking, “If you rate the 2009 one hundred, then how can this not be higher?” Well, the scoring system stops at 100, (and has for 34 years,) and will continue for as long as I continue to write about wine. Nevertheless, this blend of 90.5% Cabernet Sauvignon, 9.5% Merlot, and .5% Petit Verdot hit 14.4% natural alcohol and represents a tiny 36% of their entire production. The pH is about 3.6, which is normal compared to the 3.8 pH of the 2009, that wine being slightly lower in alcohol, hence the combination that makes it more flamboyant and accessible. The 2010 is a liquid skyscraper in the mouth, building layers upon layers of extravagant, if not over-the-top richness with its hints of subtle charcoal, truffle, blackberry, cassis, espresso and notes of toast and graphite. Full-bodied, with wonderfully sweet tannin, it is a mind-boggling, prodigious achievement that should hit its prime in about 15 years, and last for 50 to 100.

There is no denying the outrage and recriminations over the decision by the Pinault family and their administrator, Frederic Engerer, to pull Latour off the futures market next year. However, you can still buy these 2010s, although the first two wines are not likely to be released until they have more maturity, which makes sense from my perspective. Perhaps Latour may have offended a few loyal customers who were buying wines as futures, but they are trying to curtail all the interim speculation that occurs with great vintages of their wines (although only God knows what a great vintage of future Latour will bring at seven or eight years after the harvest). As a set of wines, the 2010s may be the Pinaults’ and Engerer’s greatest achievements to date. Of course, I suspect the other first-growth families won’t want to hear that, nor will most of the negociants in Bordeaux, but it’s just the way things are. Frederic Engerer, by no means the most modest of administrators at the first growths, thinks it would be virtually impossible to produce a wine better than this, and he may well be correct. If they gave out Academy Awards for great performances in wine, the Pinaults and Engerer would certainly fetch a few in 2010. P.S. Just so you don’t worry, Engerer offered up the 2009 next to the 2010 to see if I thought it was still a 100-point wine, and yes, ladies and gentlemen, it still is.

Robert Parker | 100 RPThe 2010 Latour is conspicuously deep in colour. It has an intellectual, intense and captivating bouquet with mineral-rich black fruit, graphite and crushed rose petal scents. Utterly spellbinding. The palate is the real deal. Heavenly balance, perfect acidity with seamlessly integrated new oak, there is an enthralling crescendo towards a finish that is simply as good as Bordeaux gets. Impeccable. Tasted blind at Farr Vintners 10-Year On Bordeaux horizontal.

Vinous Media | 100 VMStern, almost severe initially, this great wine takes time to show its immense fruit power. Black currant and blackberry notes are packed into the wine, along with an impressive array of spices from new wood that gives a more exotic element. At the end, though, it has a fine, structured sense of proportion. Obviously for aging over decades, so don't drink before 2022.

Wine Enthusiast | 99 WEUnbelievably pure, with distilled cassis and plum fruit that cuts a very precise path, while embers of anise, violet and black cherry confiture form a gorgeous backdrop. A bedrock of graphite structure should help this outlive other 2010s. Powerful, sleek and incredibly long. Not perfect, but very close. Best from 2020 through 2050.

Wine Spectator | 99 WS(Château Latour) The 2010 Château Latour is another very, very powerful example of the vintage, and while the wine is impeccably balanced and does not show a single strand of hair out of place, at 14.4 percent alcohol, it must be at least three-quarters of a percent headier than the legendary 2009 Latour. The result to my palate is a wine that is even more powerful than its predecessor, but also less precisely mineral on the backend and a half step behind the 2009 as a result. The bouquet of the 2010 Latour is deep, ripe and very pure, as it offers up scents of sappy cassis, black cherries, espresso, a touch of dark chocolate, Cuban cigars, gravelly soil tones and a fine base of cedary new oak. On the palate the wine is full-bodied, very powerful and ripely tannic, with impeccable balance, a bottomless core of fruit, very good balance and a very long, chewy and palate-staining finish. The ripeness of the 2010 vintage is most evident here on the backend, where the mineral lift of the much more transparent 2009 Latour is clearly absent in the 2010. This is still an absolutely superb wine by any stretch of the imagination, with no signs of heat or overripe flavors, but it is just a tad blurry and fruit-driven on the backend from the additional ripeness of the vintage. (Drink between 2030-2100)