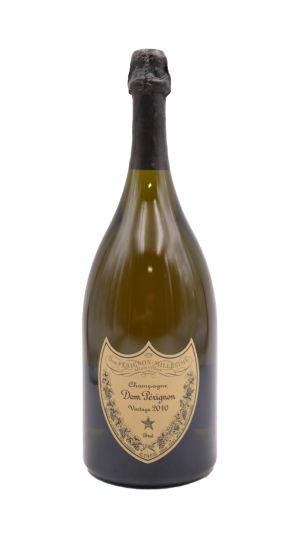 98
JS
Be the first to review this product
As low as $189.00
Only %1 left
Product ID
2010-moet-chandon-dom-perignon
Add to Wish List Add to Compare
Details

A firm and vivid Champagne with a precise, focused palate. Full-bodied and dry. It’s very layered and bright with light pineapple, peach, praline, cooked-apple and stone aromas and flavors. It’s very subtle and focused at the end. Integrated with richness and high acidity. Good depth. Reminds me of the 1995. Very clean. Solid. Lovely to drink already, but will age nicely.

James Suckling | 98 JSThe new release of this iconic Champagne shows its richness to perfection. The floral aromas lead to a wine that has weight and density as well as a balance that encompasses ripe fruits that have now matured to reveal nuttiness, toast and a tight salinity at the end. Drink through 2028.

Wine Enthusiast | 96 WEA graceful Champagne, featuring fragrant notes of toasted brioche and grilled nut that are more subtle on the palate, with a rich underpinning layered with a pure chime of tangerine and accents of candied ginger, toasted saffron and lime blossom. This bundles a lot of concentrated flavor into a lithe frame, with the fine mousse caressing the palate through to the lasting finish. Drink now through 2035.

Decanter | 93 DECThe 2010 Dom Pérignon is hard to get a read on today. I have tasted it four times over the last few months, and my feeling is that it is still not totally put together. Apricot, pastry, chamomile, mint and light tropical notes are all signatures of a hot vintage with a very fast final phase of ripening that trails only 2002 and 2003 in terms of sugars. Of course, the year had plenty of challenges. The first part of the year was marked by cold and very dry weather during the winter and spring. June saw heat and some stress in the vines. July and August were quite warm, with heavy rains on August 15 and 16 that caused a widespread outbreak of botrytis that accelerated rapidly in the days leading up to harvest. Chef de Caves Vincent Chaperon explained that Chardonnay was favored over Pinot because better aeration within the clusters helped fend off rot, while parcels that had been less stressed by the June heat also suffered less from the effects of botrytis. Perhaps because of the unevenness in the season, there is also something disjointed about the 2010. While sugars were high, so were acidities, just behind 2008 in the decade of the 2000s. It will be interesting to see where the 2010 goes over time. It is the first vintage made under the direction of Vincent Chaperon, who worked alongside outgoing Chef de Caves Richard Geoffroy for many years.

Vinous Media | 93 VMThe 2010 Dom Pérignon is already expressive, wafting from the glass with aromas of crisp green apple, peach, iodine, freshly baked bread, orange oil and smoke. Medium to full-bodied, pillowy and charming, it's soft and round, with ripe acids, a moderately concentrated core of fruit and a pearly mousse, concluding with a saline finish. Open-knit and pretty, this is a giving Dom Pérignon that readers might think of as reminiscent of a less reductive version of the 2000 vintage.