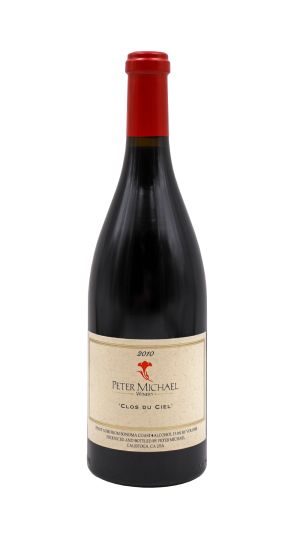 100
RP
Be the first to review this product
As low as $579.00
Only %1 left
Product ID
2010-peter-michael-pinot-noir-clos-du-ciel
Add to Wish List Add to Compare
Details

The perfect 2010 Pinot Noir Clos de Ciel (330 cases) is a dead-ringer for the 1990 DRC La Tache. This could be a game-changing Pinot Noir that sets the wine world upside down given its spectacular quality. It boasts a dense ruby/plum/purple color as well as a big, sweet bouquet of licorice, spring flowers, black currants, black cherries, forest floor and raspberries. Deep and full with a flawless attack, mid-section and finish, it builds incrementally on the palate, then lingers for 40-45 seconds on the finish. It reveals an ethereal lightness despite its intensity of flavor. This mind-boggling wine will keep for 10-15 years.

Robert Parker | 100 RPA smooth, rich and creamy red, delivering layers of blackberry, plum and blueberry flavors. Turns silky midpalate and then ends with the right touch of tannins, showing a hint of smoky oak. Drink now through 2024. 330 cases made.

Wine Spectator | 95 WSThe 2010 Pinot Noir Clos du Ciel is another huge, dramatic Pinot, but here the site seems to confer an inner perfume and sweetness that keeps the things lively, balanced and energetic as the Clos du Ciel has an upper register that works to balance the overtness of the fruit. Plums, black cherries, hard candy, asphalt, licorice and cloves wrap around the expressive, richly textured finish. A rich, intense Pinot, the Clos du Ciel should drink nicely for another decade, if not longer.