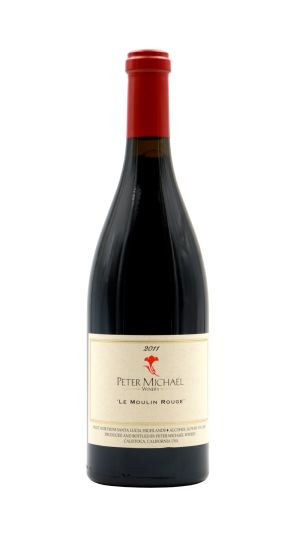 A complex red, featuring dense red berry and licorice scents, this delivers a firm beam of red berry fruit, with gripping tannins imparting a rich earthy flavor and texture on the finish. Best from 2014 through 2023. 620 cases made.

Wine Spectator | 91 WSThe 2011 Pinot Noir Moulin Rouge Pisoni Vineyard is performing slightly better than the 2012. There is plenty of cassis in its gorgeous aromatics, which are backed up by a medium to full-bodied, fleshy, succulent palate. Enjoy it over the next 7-8 years.

Robert Parker | 90 RPThe 2011 Pinot Noir Le Moulin Rouge Pisoni Vineyard wafts from the glass with freshly cut flowers, mint and small red berries. Another finely shaped, chiseled wine, the 2011 shows lovely precision and plenty of nuance. Sweet, floral notes add brightness on the saline-infused finish. Today, the new oak is a bit noticeable, so it will be interesting to see how things develop over the next year, and beyond. This is an especially silky, refined wine from a site in the Santa Lucia Highlands that often tends towards a more powerful expression of Pinot.