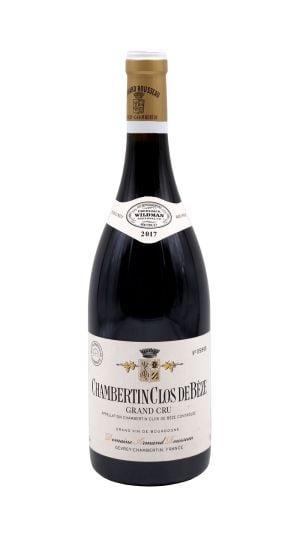 98
JG
Be the first to review this product
As low as $2,999.00
Only %1 left
Product ID
2017-armand-rousseau-chambertin-clos-de-beze
Add to Wish List Add to Compare
Details

(Chambertin “Clos de Bèze”- Domaine Armand Rousseau) The 2017 Clos de Bèze from Domaine Rousseau is an equally compelling wine in the making, but it is a bit the inverse right now of the Chambertin, as it is a bit more reserved on its youthful nose, but more open and flamboyant on the palate. The bouquet is very, very pure, precise and promising, offering up scents of red and black raspberries, cherries, raw cocoa, a very complex base of minerality, lovely spice tones and a very well-done framing of cedary oak. On the palate the wine is full-bodied, pure and sappy at the core, with superb transparency and grip, ripe, seamless tannins and a very long, very energetic and vibrant finish. The wine is already suave and caressing on the attack, with all of this sappy reserve at the core and yet, it finishes completely defined by its complex minerality. A great wine. (Drink between 2030-2100).

John Gilman | 98 JG(Domaine Armand Rousseau Père et Fils Chambertin-Clos de Bèze Grand Cru Red) While the wood treatment is certainly evident it remains reasonably subtle on the overtly cool and restrained nose that is markedly spicy with its broad-ranging combination of exuberantly fresh aromas of dark cherry, raspberry, rose petal, violet, plum and a suggestion of earth. There is excellent power and punch to the large-scaled flavors that are a combination of power and refinement while being blessed with an abundance of sappy dry extract that imparts a seductive quality to the mouthcoating, hugely long and firmly structured and chiseled finish. While the Chambertin appears to have a slight edge at this very early juncture due to having slightly better complexity, it's going to be interesting in 20 to 25 years' time to see which is the better wine! (Drink starting 2027).

Burghound | 96 BHSumptuously oaked and always poured last in any tasting at Domaine Rousseau, this is riper and plusher than the straight Chambertin bottling, with the power and density to age well, framed by 100% new wood and showing a bloody, ferrous undertone. Drinking Window 2027 - 2035.

Decanter | 96 DECThe 2017 Chambertin Clos-de-Bèze Grand Cru is the last wine to be poured as Cyrielle Rousseau mentions how it takes longer to fully absorb the oak. It has a much more introverted bouquet compared to the Chambertin this year and demands much more coaxing. Eventually it reveals brambly dark fruit, Earl Grey and a hint of chestnut. The palate is showing the wood at the moment (as Cyrielle Rousseau had predicted) although there is immense substance here with an almost candied, savoury finish that is going to be intriguing once bottled. It is very persistent...but will it exude the nobility of the Chambertin?

Vinous Media | 94-96 VMThe 2017 Chambertin-Clos de Bèze Grand Cru bursts from the glass with extroverted aromas of dark, plummy fruits that mingle with notes of chocolate, licorice, sweet oak spice, grilled meats and espresso. On the palate, it's full-bodied, rich and ample with broad shoulders, a generous core of fruit and more mid-palate amplitude and tannic bite than the Chambertin.