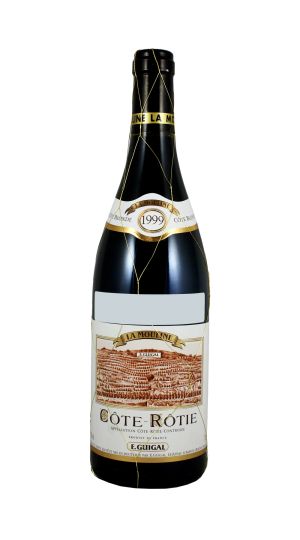 The 1999 Cote Rotie la Mouline is straight-up awesome on all accounts. Drinking beautifully, with explosive aromas and flavors of blackberry, smoked meats, pepper and exotic flowers, this puppy hits the palate with full-bodied richness, beautiful concentration and a seamless, sexy and oh, so fine texture that is the hallmark of this cuvee. This is another wine that will continue to evolve gracefully, yet I’ve been lucky enough to have it multiple times recently, and when a bottle is drinking this good, don’t miss it by always waiting for another day.

One of the reference point estates for top quality wines in the world today, the family run Guigal operation was created in 1946 by Etienne Guigal. Today, Etienne’s son, Marcel, and his son Philippe, are firmly in control here, and are without a doubt producing some of the most singular, sought after wines in the world. Due to the size of this tasting, I’ll keep my comments short, but the incredible quality coming from this operation is astounding, and a tasting here is always one of the highlights of any trip through the region. Furthermore, while a lot is said about the extended oak aging regime here, I don’t know anyone who tastes mature examples of these wines on a regular basis that still has any doubts about the genius going on here. In short, these single vineyard (and their blends as well) Cote Roties are some of the greatest wines money can buy. For this tasting (which, with the Guigals, is always a large one!), we focused on their Saint Joseph Vignes des Hospice release, and then three of their Cote Roties, starting with the classic Brune et Blonde, then the Chateau d’Ampuis, and finishing with their single vineyard La Mouline.

Looking first at their Saint Joseph Vignes des Hospices release, it comes all from the incredibly steep (and picturesque) vineyard perched just above the town of Tournon. The exposure here (which is critical for Saint Joseph as the more southern facing the plot, the warmer the site is) is mostly east facing and the soils are pure granite (identical to the decomposed granite found in the Les Bessards lieu-dit on Hermitage Hills). Compared to the Saint Joseph lieu-dit, which has a slightly more southern exposure, harvest here is always 5-7 days later.

Moving north to Côte Rôtie, the Guigal’s Brune et Blonde is their entry level release that comes from a mix of vineyards, most of which are estate. It drinks beautifully on release and has a solid 15-20 years of longevity in top vintages.

Stepping up over the Brune et Blonde, the Cote Rotie Chateau d’Ampuis is named after the Chateau d’Ampuis estate (which lies in the town of Ampuis, right up along the Rhone River, and was purchased by the Guigal’s in 1995) and is a blend of their top estate vineyards. Coming from La Garde, Le Clos, Grande-Plantee, Pommiere, Pavillon, Le Moulin and La Viria, it spends close to four years in new French oak (handled just like the single vineyard releases) and there’s roughly 30,000 bottles produced in each vintage. While the single vineyard releases get all the buzz, this is isn’t far behind in quality, especially in recent vintages, and can represent an incredible value.

We finished the tasting with a vertical of La Mouline. One of the three single vineyard Cote Roties produced, this cuvee comes all from the La Mouline lieu-dit that’s located in the more western (close to the middle actually) side of appellation. For simplicities sake, you could say it’s in the Cote Blonde part of the region, but in reality, Cote Rotie is much more complex and diverse. Due to its exposure, this vineyard is always the first of the three single vineyards to be harvest, and also contains some of the oldest vines on the estate. Fermented using pump overs (as opposed to punch downs for the La Torque and submersion cap on the La Landonne), it’s cofermented with varying degrees of Viognier, which in most vintages, ends up being around 10% of the blend. Like the Chateau d’Ampuis and the other two single vineyard releases, it sees close to four years in 100% new French oak, of which every trace integrates after a few years in bottle. It’s always the most approachable of the single vineyard releases, and is ready to drink at an earlier stage. For example, the 1999 La Mouline is gloriously mature, while the 1989 La Torque is still an infant. Nevertheless, as the 1978 reviewed here attests to, it has no problem evolving for decades (although I don’t recommend holding bottles that long). In short, this was a flight of Côte Rôties I’ll not forget anytime soon!

Robert Parker | 100 RPThis offers a stunning depth of fruit, with a nearly endless beam of raspberry ganache and linzer torte woven with very alluring incense, truffle and mesquite notes. There's superb minerality buried deep on the long, flashy finish. Still has some surprising tannins to shed, though this is not as outwardly grippy as the Landonne. Contains 11 percent Viognier.--1999 Côte-Rôtie non-blind retrospective. Drink now through 2030. 415 cases made.