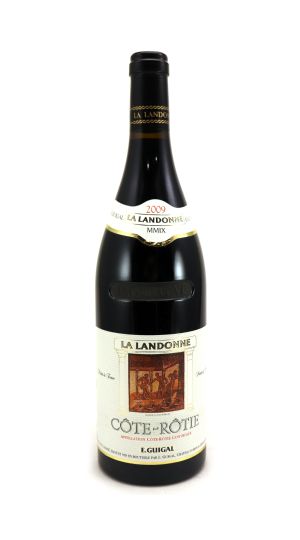 I’ve been lucky to have drunk close to a case of the 2009 Côte Rôtie La Landonne, and if there’s a more perfect Syrah out there, I don’t know of it. Revealing a vivid ruby/purple color, it delivers a spectacular bouquet of crème de cassis, smoked meats, graphite, spring flowers, crushed rocks, and hints of bacon fat. Possessing full-bodied richness, a colossal, massive core of fruit, ample polished tannins, and perfectly integrated oak, it’s a thrill a minute due to the opulence and sexiness of the vintage yet promises to last for another 30-40 years. It’s one of the greatest Syrahs ever produced.

Jeb Dunnuck | 100 JDThe 2009 Cote Rotie La Landonne is a killer wine. An extravagant bouquet of black truffles, roasted meats, licorice, ground pepper, blackberries, scorched earth and camphor soars from this muscular, dense, over-the-top, serious, masculine La Landonne. Built like Arnold Schwarzenegger was two decades ago, this enormously concentrated bodybuilder of a wine should hit its prime in a decade, and last 40-50 years. This is no trivial boast as the debut vintage of La Landonne, the 1978, is just reaching full maturity at age 34.

Robert Parker | 100 RPThis delivers a stunningly ripe, pure, polished bolt of plum confiture, along with notes of anise, mocha, blueberry coulis, Black Forest cake and espresso. The finish sports admirable grip for this ripe-styled vintage, with a grounding rod of iron buried deeply. There's fruit and muscle now, with minerality to burn while this is cellared. Best from 2015 through 2040. 1,000 cases made.

Wine Spectator | 99 WSGlass-staining purple. Explosive aromas of dark berries, fresh violet and anise, with a hint of smokiness in the background. Sappy and incisive on the palate, offering deeply pitched, spice-tinged cassis and bitter cherry flavors accented by bitter herbs. Closes extremely long, with firm tannic grip and alluring sweetness, leaving a zesty mineral note behind. Showing a surprising degree of elegance for the vintage and for this bottling, which is usually the most forbidding of Guigal's big-gun Cote-Roties.